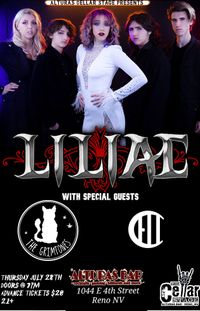 Alturas Cellar Stage presents LILIAC Doors 7:00pm. Music starts at 7:30pm Advance $20, Doors $25 21+ Tickets on sale now!! With special guests THE GRIMTONES 8:15-8:45pm https://www.facebook.com/TheGrimtones CELL 7:30-8:00pm https://www.facebook.com/thebandcell 5-piece Los Angeles-based, family Rock/Metal band, “Liliac” has sparked the world by storm. This female-fronted band consisting of all siblings’ ages 13-22 has brought a unique and fresh sound they call “Vamp Metal”. Lead vocalist, Melody (20), with her raspy-powerful voice; Lead guitarist, Samuel (22), with his skillful-effortless guitars; Drummer, Abigail (21), with her solid-thunderous drums; Bassist, Ethan (15), with his rich-thick bass; Keyboardist, Justin (14), with his passionate-polished keys; is what makes this band so incredible and catches the eyes of millions. Liliac, which means “bat” in Romanian, not only, has a unique meaning but also a unique story. Their father, seeing the talent in all five kids, envisioned the band. Giving each of them instruments to learn, they started out street performing on the Santa Monica pier, every weekend, for many years. Building their confidence and honing their craft, Liliac would gather large crowds interested in watching this family perform. Little did they know they would become a young music sensation... They began covering famous/popular rock and metal songs, which went viral on all social media platforms. Which soon led them being on national television on a competition show called “World’s Best” on CBS and NBC's "America's Got Talent". Soon there after, they began writing hook-heavy original material with their father producing and recording in his home studio. They released their first EP “Chain of Thorns” in 2019, which hit #1 on Amazon’s Best Seller for Rock Music Charts. In the summer of 2019, their first North American tour consisting of 40 dates brought in thousands of fans and sold-out shows, which was a huge success for the band. In 2020 they released their full length album of 13 original songs titled "Queen of Hearts" landing #29 on iTunes Rock charts. Touring nationally all across the country and hoping for an international tour in the future. With their youth, passion and hard work, you will hear more about them because they are here to impact the world!!!